Single ACADEMIC workstation perpetual license of V-Ray for form·Z for form·Z pro or form·Z jr. Includes one V-Ray for form•Z interface license and one V-Ray Render Node using the V-Ray on-line License server. Proof of ACADEMIC qualifications required. Must be student or faculty.

V-Ray, the top of the line rendering software can be added to form Z. Create stunning renders on NVIDIA CUDA GPUs, CPUs or a combination of both. V-Ray includes a material library containing over 550 unique, realistic materials. V-Ray for form Z is compatible with form Z 8.5 and 8.6.

form•Z pro is a powerful 3D design application featuring a variety of modeling personalities and tools with an easy to use interface to express and communicate your imagination. It is based on advanced 3D solid and surface modeling methods that maintain accurate representations as you progress from design to visualization, layout, animation and fabrication. 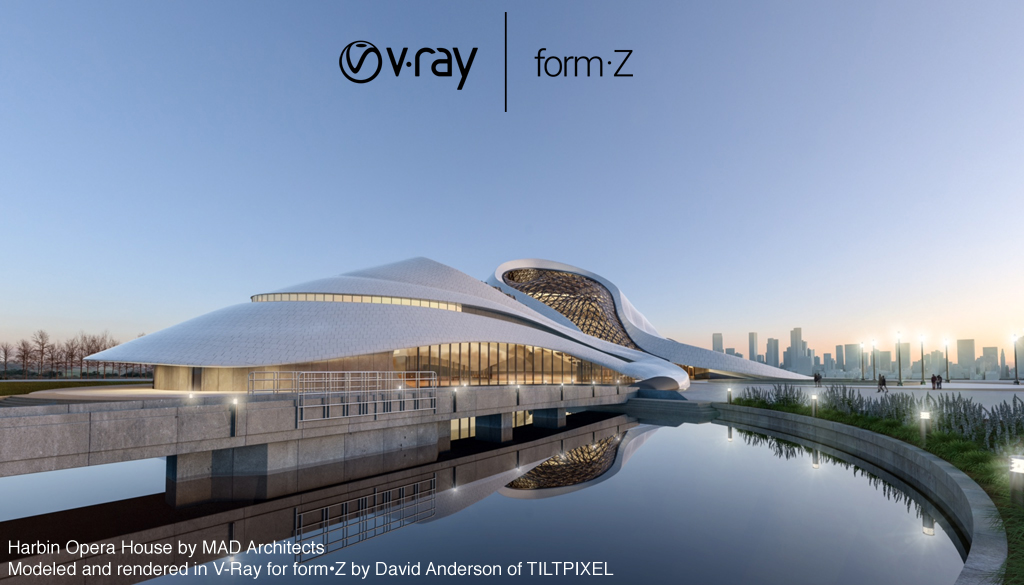 Powerful hybrid rendering – You can render on NVIDIA CUDA GPUs, CPUs — or a combination of both.

Material library – over 550 realistic physical based materials, such as glass, coated plastics or metals, wood,stone and etc.

Denoiser – With V-Ray's new denoising technology, you can automatically eliminate noise and cut render times by up to 50%!

Powerful light calculations – the V-Ray Adaptive Lights algorithm will speed renders up to seven times faster on some scenes.

Macintosh computer with Intel processor.
OS X 10.9.5 or later.
Note that the latest updates are recommended.

Required to load V-Ray for form•Z plugin and perform renderings. Licenses can be borrowed (checked out) for off line use. An alternate dongle license is available..

A discrete video card is required for some features (i.e. GPU and Hybrid rendering). The card should have at least 2 GB of memory to support these features.